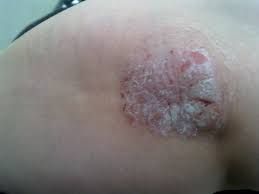 According to the American Academy of Dermatology, approximately 7.5 million people in the United States have psoriasis. Though psoriasis can affect people in any age group, it is most likely to affect people over the age of 55. This disease is usually associated with red, inflamed, and scaly skin, but it can have far more serious consequences.

Psoriasis is an autoimmune disease, meaning it is an illness in which the immune system produces antibodies that attack normal, healthy body tissue. It is a difficult disease to treat, since the body “sees” normal healthy tissue as diseased tissue which needs to be destroyed.

While the most common symptoms of psoriasis are patches of red, inflamed skin and scaly rashes, the disease can also cause widespread inflammation throughout the body.

An individual afflicted with psoriasis has overactive white blood cells, which cause the production of chemicals that trigger inflammation. This inflammation dramatically raises the risk of developing severe complications.

One set of organs at particular risk from psoriasis is the lungs. There are three main forms of lung disease associated with psoriasis.

Sarcoidosis is an inflammatory disease which affects many organs, in particular the lungs. A large study conducted over a period of 10 years concluded that people with psoriasis were far more likely to develop psoriasis than the general population. Once again, it was noted that the greater the severity of the psoriasis, the greater the risk for pulmonary sarcoidosis.

Pulmonary fibrosis is a progressive disease which causes permanent scarring to lung tissue. A 2017 study that provided evidence that people with psoriasis may have an increased risk of developing pulmonary fibrosis.

If you have psoriasis, it is important to be aware of the early signs of the lung diseases that may result from this condition. There are five main symptoms to be aware of:

If someone with psoriasis experiences any of the symptoms listed above, it is important for them to see their doctor as soon as possible.

Laurel Bay Health and Rehabilitation Center, in the scenic beach town of Keansburg, NJ, specializes in pulmonary care. Headed by leading pulmonary specialist Dr. Avtar Parhar, our program is the most highly advanced pulmonary rehabilitation program in Monmouth County. At Laurel Bay, we focus on restorative and preventive care for those who suffer with chronic respiratory disease.