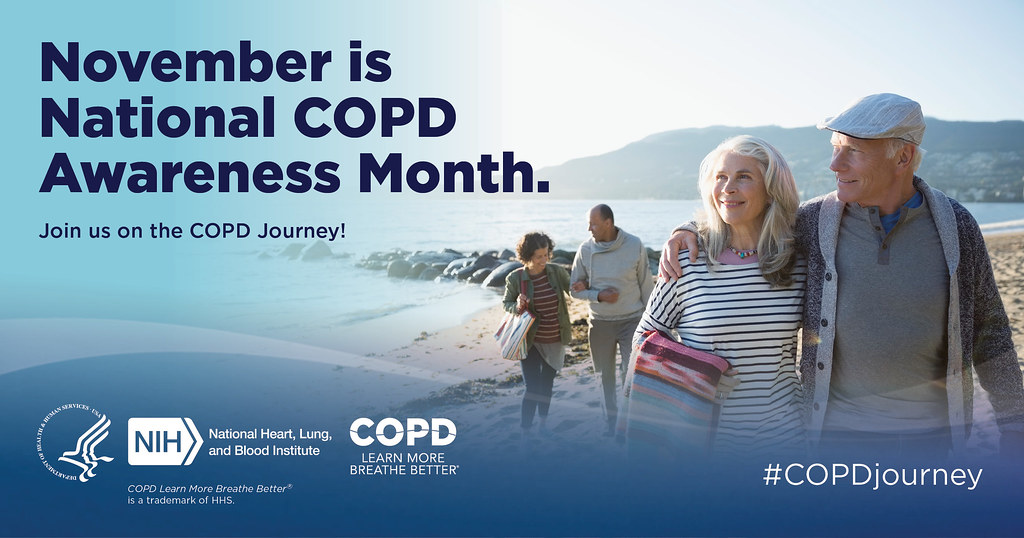 Now is the perfect time to share the facts about this disease, which is the fourth-leading cause of death in the US.

Chronic Obstructive Pulmonary Disease (COPD) is a progressive lung disease that includes emphysema and chronic bronchitis. Emphysema and bronchitis work differently: emphysema destroys the lungs’ air sacs, while bronchitis causes inflammation of bronchial tubes. However, what they have in common is that they cause progressive difficulty in breathing. As many as 30 million people in America have COPD, though only 50% of them have been diagnosed with the disease.

What Are the Symptoms of COPD?

Because COPD is a progressive disease, symptoms vary according to the stage of the disease.

Symptoms of early-stage COPD include:

Symptoms of mid-stage COPD include:

Symptoms of late-stage COPD include:

Since these symptoms are general, and can often be ascribed to other causes, many people with COPD do not realize they have the disease until it becomes a medical emergency. While it is obviously best to catch COPD early, people should be aware that emergency treatment is needed if any of the following symptoms are present:

In developed countries, 90% of people with COPD are either smokers or former smokers. According to the COPD Foundation, between 20-30% of long-term smokers will eventually develop COPD. In the developing world, COPD is also associated with poor ventilation in homes, leading to the inhalation of fumes from fuel used for heating and cooking.

Lung irritants — such as air pollution, dust inhalation, and exposure to chemicals and fumes in the workplace — can also cause COPD. In the United States, West Virginia, with its coal mining industry, leads the country in COPD prevalence.

A small percentage of COPD, just under 5%, results from a genetic deficiency of the protein alpha-1-antitrypsin.

How is COPD Treated?

While there is no cure for COPD, it can be managed with medication, oxygen therapy, and, in severe cases, surgery.

COPD requires a lifetime of management. Education is the best way to keep the lungs of someone suffering from COPD healthy. Most private insurance plans, as well as Medicaid and Medicare, will pay for pulmonary rehabilitation for COPD. Pulmonary rehab includes progressive exercise, the introduction of therapeutic lifestyle changes, counseling, as well as strategies to manage one’s energy throughout the day.

Laurel Bay Health and Rehabilitation Center, in the scenic beach town of Keansburg, NJ, specializes in pulmonary care for COPD and other lung disorders. Headed by leading pulmonary specialist Dr. Avtar Parhar, our program is the most highly advanced pulmonary rehabilitation program in Monmouth County. At Laurel Bay, we focus on restorative and preventive care for those who suffer with chronic respiratory disease.