Since it is the first month of the year, many people are still trying to keep their New Year resolutions. Some people decided that this year they are really going to do something to help others. One way, perhaps, is by donating blood during National Blood Donor Month.

For those of us who are allowed to donate blood, January is an important month. The blood banks are relatively low on supplies. It’s cold and a portion of potential donors might be overcome by the winter shivers. Storms or illness prevent them from donating blood. The Red Cross was inspired by the need for blood supplies in the winter months. National Blood Donor Month was initiated in 1970.

Who Can Donate Blood? Is There an Upper Age Limit?

There are general criteria that are used to decide if a person may donate blood.

A potential donator must be a healthy weight, over 110 pounds. The minimum age is 16 or 17 years. There is no upper age limit for donators in most states.

The conclusion was that people may donate repeatedly until the age of 71 years if they fit the criteria. For people over the age of 75 years however, extra caution should be exercised. All donors were assessed by the in-house donor physician, so risk was minimized. Sometimes donors over the age of 68 years, took longer to recover after donating. On the whole though, older donors reacted even better, following donation, than the younger donors.

The bottom line was that older donators provided a significant portion of donations. Nevertheless, the study authors felt that other segments of the population that had not donated at that point should come forward and do so.

The fact that the world’s population is ageing is bandied about worldwide. A separate study found that demographic changes were matched by shifts in patterns of blood donators. A greater number of older people are donating nowadays.

What Criteria Can Cause a Donor to be Deferred?

However, there are things that can cause a donor to be deferred from donating. These include:

We can understand that the whole process of donor screening is for the benefit of the potential donors and the safety of potential recipients.

I can’t Donate, It’s Not Fair

If you can’t donate blood for health or other reasons, you don’t have to feel left out or sour grapes. There are other ways to support this worthy cause:

Anyone who wants to donate is screened at the start of the process. There is a donor-screening doctor who give the final okay or deferral. But it could be wise to ask your doctor if you may donate. If the doctor says you may not, you could ask when you would be able to donate in the future.

Your own health comes first, and your blood must serve you well, before you can think of sharing any of it. A senior who is in rehabilitation probably has a number of issues to clarify before donating blood. But it is not for sure that you would be deferred. So, look after yourself. Eat, drink and sleep well. Do any exercises you were told to do. When you are at your peak, ask about becoming a donator.

National Blood Donor Month comes every year, so if you can’t donate this year, maybe next year. Then again, there are those that say, every day is a good day to donate blood…. 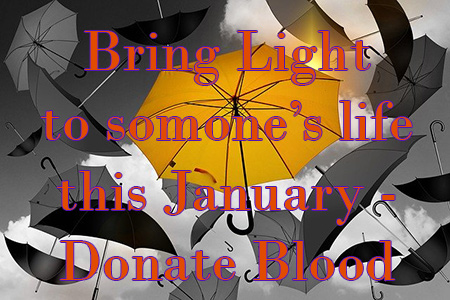