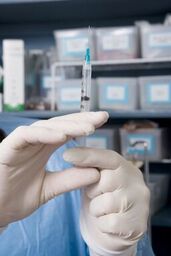 The Centers for Disease Control and Prevention (CDC) has reported that as of the week ending December 22, 2018, incidence of the flu has already reached elevated levels in nine out of ten regions in the United States. The CDC, the federal agency in charge of public health in the United States, reported that in the previous week, which ended on December 15, only two regions had reported high flu activity.

In particular, high flu activity has now appeared in New York City and in the state of New Jersey. The only region in which the flu remains at normal, expected levels is Region 10, which includes Alaska, Idaho, Oregon, and Washington.

NORC at the University of Chicago, originally known as the National Opinion Research Center, has been contracted by the CDC since 2005 to conduct its national survey on vaccination. According to their research, NORC reports that only 43% of people surveyed have reported being vaccinated against the flu this year. Another 14% claim they intend to be vaccinated.

While it cannot be proven that a low rate of vaccination causes an unusually high incidence of flu, it remains the case that flu vaccination is the best way to avoid the flu. This is particularly significant this year for two reasons:

In other words, this year’s flu vaccine is highly effective, and is the best way to avoid the high rates of flu-related deaths and complications we saw last year.

Those at highest risk of complications from the flu include adults 65 and older, residents of long-term care facilities, people with weakened immune systems, asthma, diabetes, and heart disease.

The most common serious complication of the flu is bacterial pneumonia; however, the flu can also exacerbate such chronic conditions as asthma, congestive heart failure, and diabetes.

Laurel Bay also has a dedicated Alzheimer and dementia unit, and offers respite and hospice care.