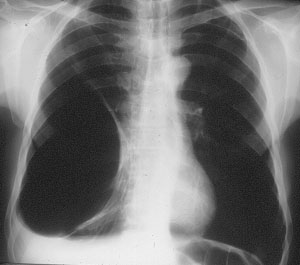 Lung conditions such as Chronic Obstructive Pulmonary Disease (COPD) can cause large air pockets to form inside of the lungs. These large air pockets are known as bullae. Without treatment, these bullae can continue to grow in size. As they grow, they take up an increasingly large space in the lungs, causing pressure to build within the lungs, and making breathing difficult. If the situation is severe enough, doctors may recommend surgical removal of the enlarged air sacs, known as a bullectomy.

Large bullae have been known to grow to nearly 8 inches in diameter. Those that take up more than one third of the space within the lung are often referred to as giant bullae. Giant bullae not only make breathing difficult, uncomfortable and labored, but can also lead to other health complications. For example, giant bullae can burst, leading to a collapsed lung.

A variety of tests are required to verify which patients would be good candidates for a bullectomy. After a CT scan, doctors will consider a variety of issues in order to determine whether the patient is a good candidate for surgery. Among the most important factors to consider are:

The good news about a bullectomy is that it is a relatively safe, minimally invasive procedure, particularly when the patient receives respiratory therapy before the procedure. Recovery time after surgery is relatively short. In most cases, people will return to their homes after two or three days, though this is highly dependent on the individual’s overall health before their procedure. A full recovery usually takes a few weeks.

One of the most important factors in successful management of bullae, and of COPD in general, is having the best pulmonary team possible. Laurel Bay Health and Rehabilitation Center, in the scenic beach town of Keansburg, NJ, specializes in pulmonary care. Headed by leading pulmonary specialist Dr. Avtar Parhar, our program is the most highly advanced pulmonary rehabilitation program in Monmouth County. At Laurel Bay, we focus on restorative and preventive care for those who suffer with chronic respiratory disease.